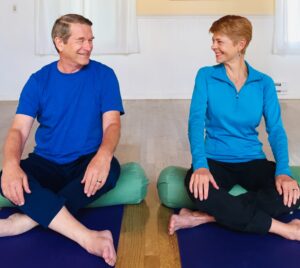 Nada and Whit met when they were both working as professional dancers in New York and have been together ever since.  Whit is now retired after leaving the dance world for a 30  year career sitting in front of a computer.  Nada is a professor of theater and dance at the University of Colorado and a movement therapist specializing in the Alexander Technique.

One of  Whit’s goals in retiring was to be able to dance again.  He credits Kaiut Yoga with enabling him to get back to dancing, “just for the joy of moving my body through space”.  Nada has had a very long dance career and has “put a lot of miles on the body” resulting in having had both knees replaced.   She explored other types of yoga periodically in the past but found some of the poses too extreme.  When she heard Kaiut Yoga described as a practice of going to the edge but not forcing past the edge, she decided to give it a try.

The permission, the space, to work my body, which I know really well, and being able to pull back when I need to or now I can go, it’s helped to not only get greater recovery in my knees… I’m doing stuff now that I haven’t done in years… I’m getting my dancing body back…at age 73!

Great to have you both in class Nada and Whit. Keep on dancing!