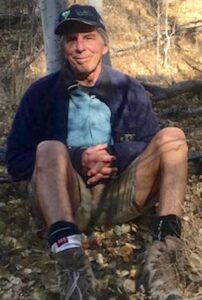 A lifelong seeker, Don has followed his passions into a variety of professions including having worked as a massage therapist, psychotherapist, entrepreneur, carpenter, handyman, property owner/manager and author. By his own admission, he has brought a healthy dose of skepticism with him into all of his pursuits, his yoga practice being no exception.

As a swimmer, Don had always considered that his swimming was delivering the same benefits, if not more benefits, as a yoga practice might deliver.  However, the experience of knowing two people (one of whom happened to be his wife, Barbralu Cohen) who seemed to have benefited enormously from their yoga practice really made an impression on Don and motivated him to give Kaiut Yoga a try.   Don was particularly hopeful that the yoga might help alleviate the chronic shoulder stiffness and pain he was experiencing.

Shortly after Don began his initial exploration of Kaiut Yoga, he had to stop practicing because he underwent shoulder surgery followed by a lengthy period of recovery.  Now four months after his surgery, Don is back in class and giving Kaiut Yoga another go.  Not ready to offer an unqualified endorsement of Kaiut Yoga, Don nevertheless continues to feel intrigued by the possibilities this practice might hold for him and feels motivated to continue to explore those possibilities by coming to class.

Even as a skeptic of so many things, it’s still about being open to see what happens…I just keep thinking:  Give it some time because it seems like something’s real here.  I’m not sure what it is, but it makes sense.   The whole idea of the practice makes sense, just using your body and going into places that you normally wouldn’t go or might not go and gently seeing if you can access them. That makes sense to me.

I would say one of the other reasons I’m still giving this a try is because of the teachers. I’m really impressed by all of them.  It’s hard to discount that there’s something going on here in what the teachers  are saying and teaching.  It’s obvious that they’re totally dedicated and something must have happened that really changed their lives and it comes through, not just in their ability and their education but in their heartfulness when they teach.